As for the thermocouple, we split the word: Pt and 100. Pt is the chemical symbol for Platinum, 100 is the resistance in Ohm of the Pt100 at 0 °C. The resistance changes (fearly linear) with temperature are: 0.385 Ohm/°C for European and 0.392 Ohm/°C for American elements. So, by measuring the resistance we can calculate the temperature. Never use a European Pt100 with an American instrument unless you know that it is set for the right conversion factor (usually called 'alpha'). In english a Pt100 is also called a RTD element, meaning Resistance Temperature Detector. An RTD or Pt100 sensor is connected with two, three or four wires to the measuring device. we learned that we are in fact measuring resistance to determine the temperature. Now when measuring the resistance of the sensing element, we also measure the resistance of the leads and cables used. This gives an error! To compensate for this, the three wire type (bridge) is used, giving enough accuracy in most industrial applications. Even better accuracy is possible with a four wire Pt100 (laboratory applications). Our Pt100 panel mounted indicators have an offset compensation when using two wire sensors. If you want high accuracy, for example better then 0.5°C between 0 and 100°C, go for the Pt100.

The precision reached thanks to the technical solutions adopted in the development of these sensors and the reliability proven by the tests performed make NTC probes reliable and affordable transducers for measuring temperature.

The range of IP 68 temperature sensors now includes TS* series (with two new immersion sensors, NTC and PT100, PT1000 suitable exclusively for hydronic applications) and a new pass-through temperature sensor to be used in the blast chiller applications, where the sensor is used for measuring the temperature in the product heart. 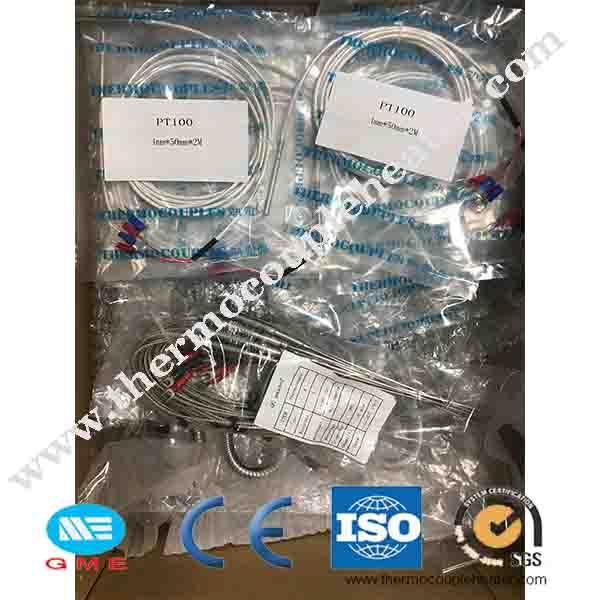